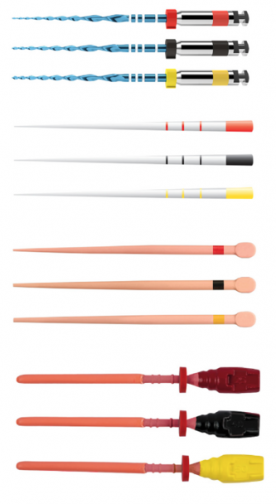 The use of mechanical instruments in reciprocation with unequal forward and reverse rotation was introduced in 2008 (1). Reciproc® series of instruments by VDW were designed specifically for this type of motion (2).

Reciproc® blue is a thermally treated nickel-titanium instrument, it is an improved version of the original Reciproc® (3). It has an increased resistance to cyclic fatigue and a greater flexibility (4).

This article describes the use of Reciproc® blue instruments for the canal preparation without any prior instrumentation and without a glide path. Only one instrument is needed to enlarge the majority of the canals to an adequate size and taper regardless of the size of the canal, the degree of canal curvature or canal calcification.

The technique is simple. In the majority of the canals, only one RECIPROC® blue instrument is used in reciprocation to complete the canal preparation without the need for hand filing or creating a glide path. The requirements for the access cavity and the straight-line access to the canals, and the irrigation protocols remain unchanged.

Before commencing preparation, the length of the root canal is estimated with the help of an adequately exposed and angulated pre-operative radiograph. The silicone stopper on the instrument is set at two-thirds of that length. RECIPROC® blue is introduced in the canal with a slow in-and-out pecking motion without pulling the instrument completely out of the canal. The amplitude of the in- and out- movements (pecks) should not exceed 3-4 mm. With this flexible instrument, only very light pressure should be applied. The instrument will advance easily in the canal in an apical direction and should not be forced forward. After 3 pecks, or if resistance is encountered before the 3 pecks are completed, the instrument is pulled out of the canal to clean the flutes. A #10 hand file is used to check patency to two-thirds of the estimated length. The canal is copiously irrigated. The RECIPROC® blue instrument is then re-used in the same manner until it reaches the two-thirds of the estimated length. The canal is irrigated and a #10 file is used to determine the working length with the aid of an apex locator and a radiograph. After that RECIPROC® blue is used as described until it reaches the working length. As soon as the working length is reached, the instrument is withdrawn from the canal to avoid an unnecessary over-enlargement. The RECIPROC® blue instrument can also be used with a brushing motion against the walls of wide canals.